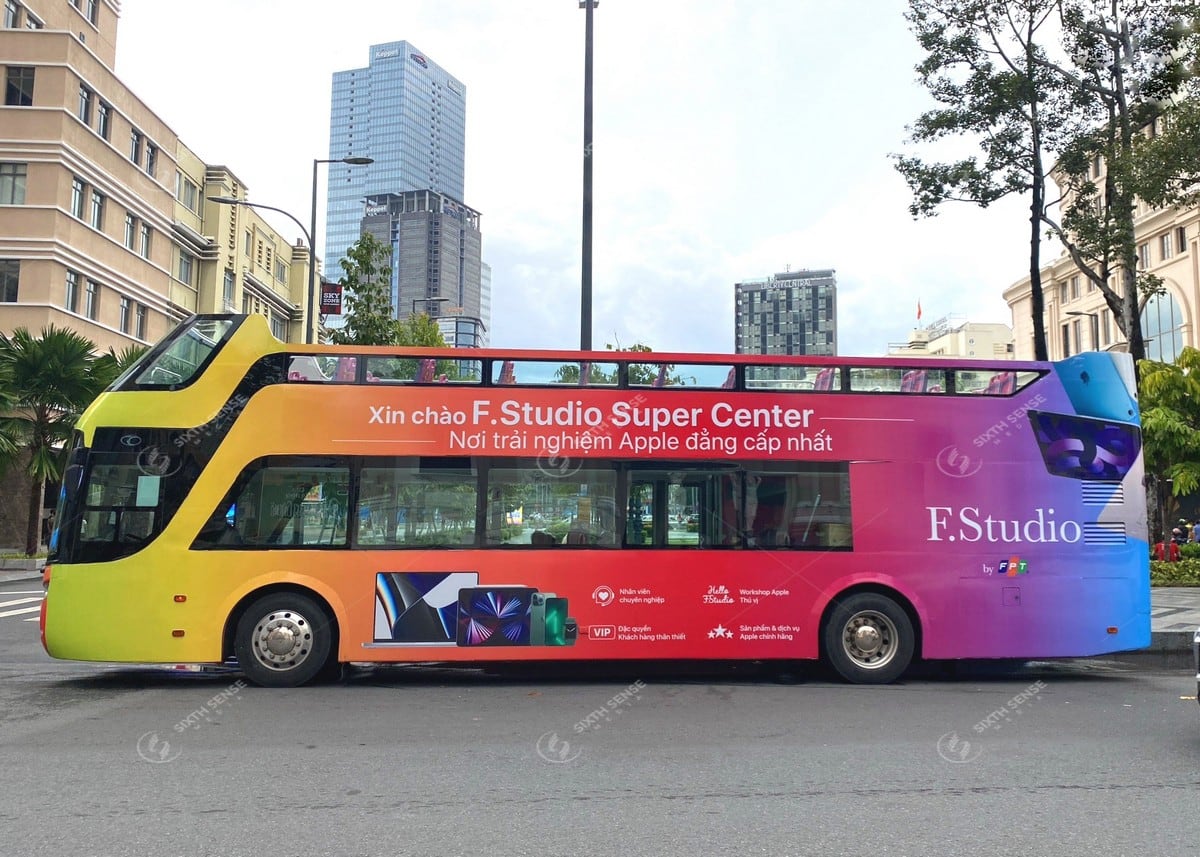 The roadshow double decker bus project of F.Studio is part of a series of activities to celebrate its 10th anniversary and announce a new upgrade of the store system.

F.Studio by FPT was born in September 2012. This is also the first Apple authorized store chain in Vietnam.

After 10 years of development, receiving trust from customers, F.Studio decided to expand its scale to bring better experiences to customers. That’s why on August 13, F.Studio officially held an event “Hello F.Studio Super Center” to announce the expansion of technology experience zones that meet global Apple standards.

F.Studio Super Center will have an area twice as large as the old store and own the design and layout style according to the latest Apple standards. In addition to professional staff to support and advise, the store will also regularly organize workshops to answer all questions of customers.

All customers who come to F.Studio Super Center, whether they are new or loyal customers, can accumulate points, receive special offers and discounts from the store. 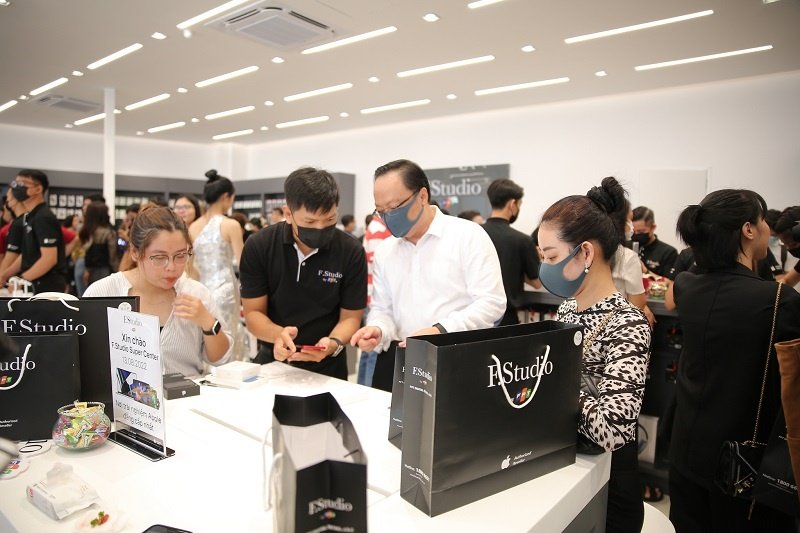 The launch event of F.Studio Super Center is one of the most important events in 2022 that FPT organizes. Therefore, advertising and communication programs for this event are also invested more.

Belonging to one of the largest information technology companies in Vietnam, the advertising campaign of F.Studio Super Center must also be updated according to the latest and most prominent trends. Which is the roadshow double decker bus! 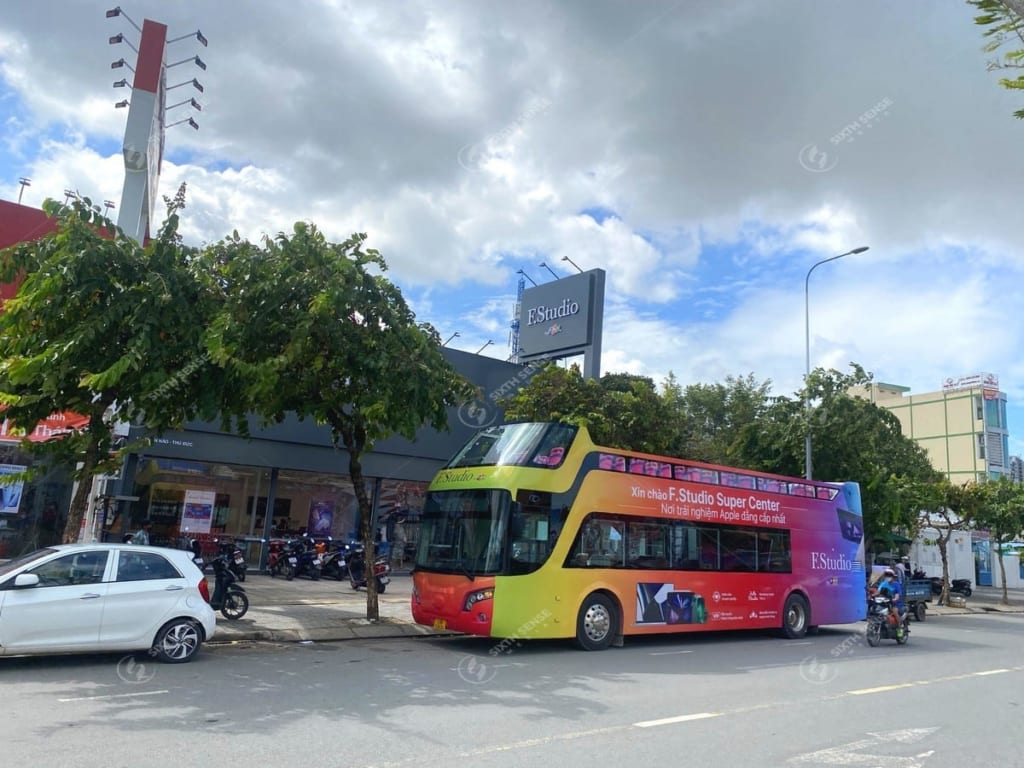 F.Studio Super Center’s roadshow double decker bus project was held in 7 days in Ho Chi Minh City, at the same time as the opening event. The double-decker bus will parade around the city to introduce more customers to the event “Hello F.Studio Super Center” at the store at 141 Tran Nao, District 2. 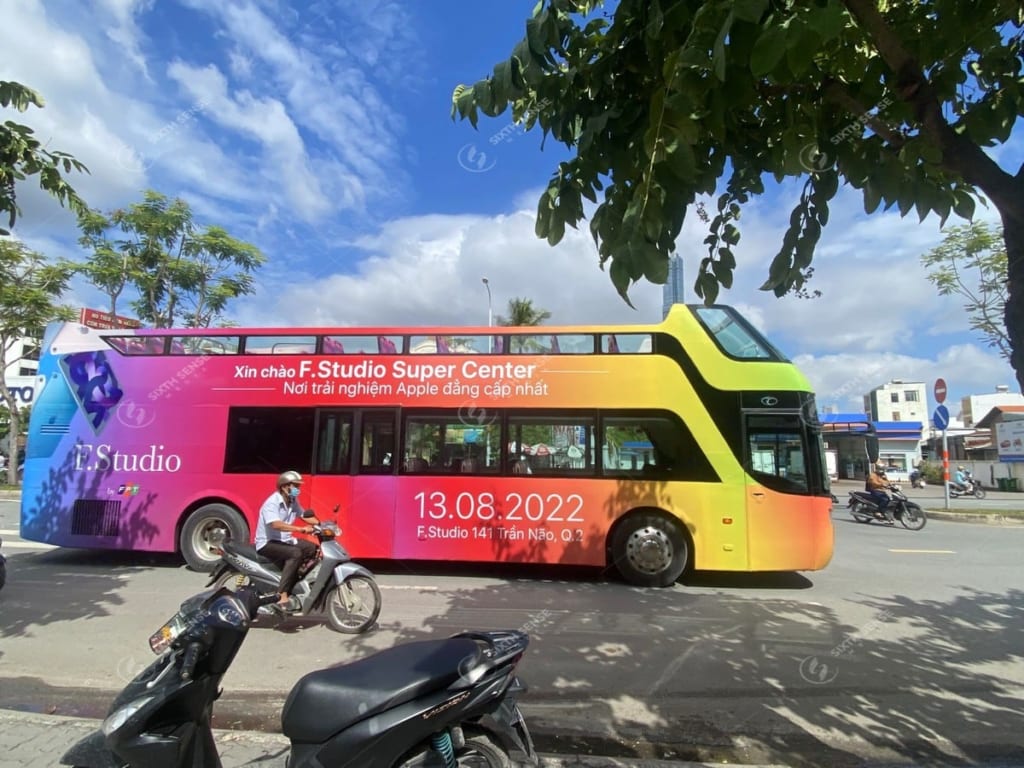 F.Studio Super Center chooses outstanding ombre tones with impressive color transitions. The information content and images are presented on the maquette very simply, clearly presented so that customers can receive it quickly and fully. 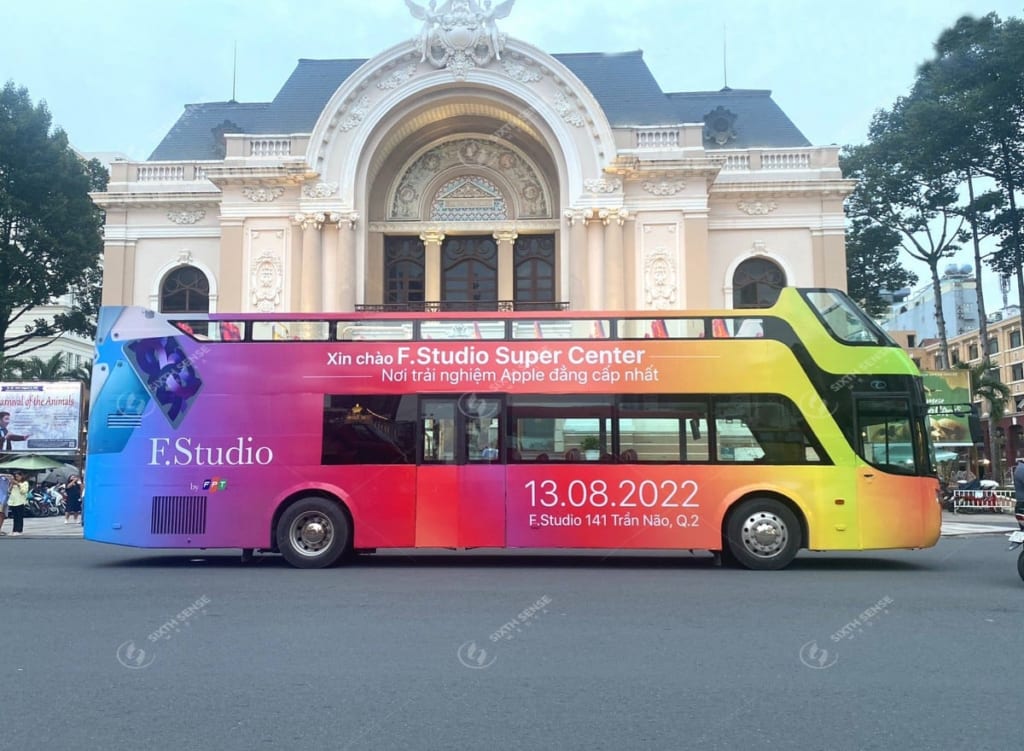 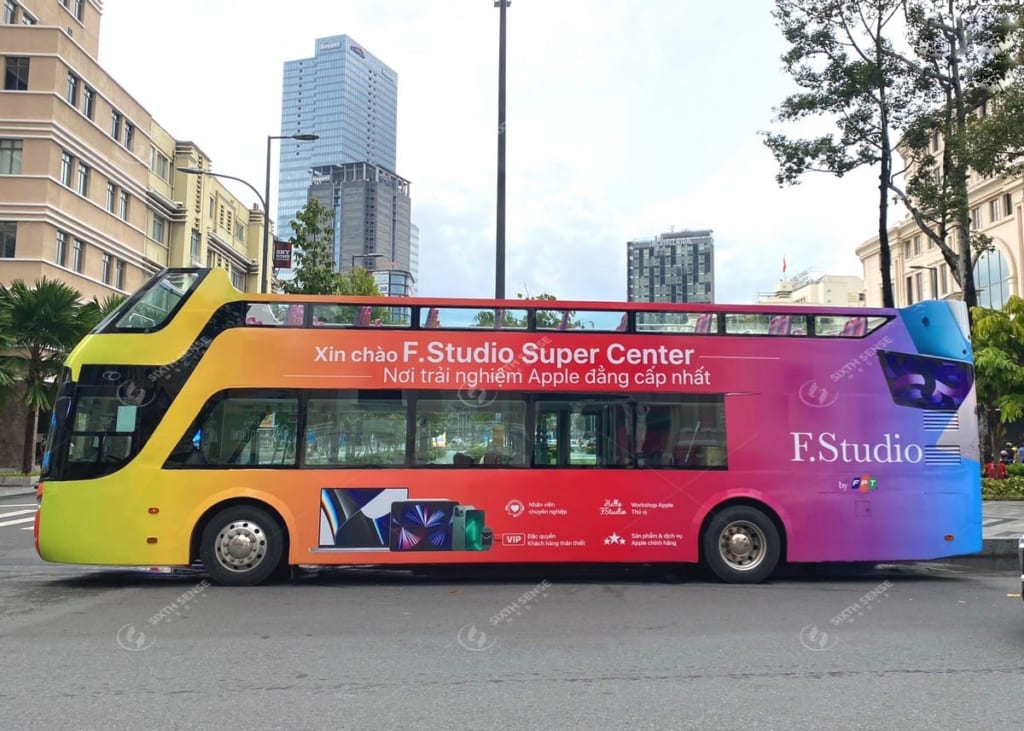 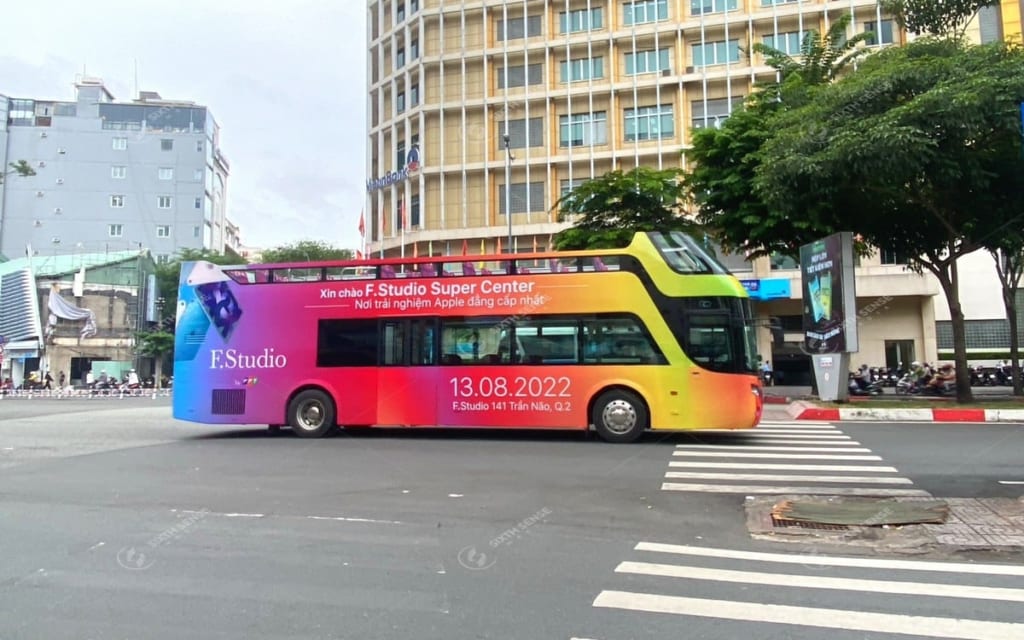 Sixth Sense Media is pleased to participate in FPT’s “Hello F.Studio Super Center” series of events. We are very honored to be the unit directly implementing the whole project of the brand’s roadshow double decker bus.

With many years of experience, having organized many similar campaigns, Sixth Sense Media quickly grasped the requirements and came up with a plan to organize a roadshow suitable for F.Studio Super Center. The whole process from bus rental, design, printing, decoration to operating, legal issues are quickly supported by SSM for the brand.

The success of F.Studio Super Center’s roadshow double decker bus campaign once again affirms SSM’s position in the field of advertising roadshows. We are confident to bring the best quality roadshow campaigns, satisfy customers with the most affordable prices!

Venezia Beach has had a monumental roadshow double-decker bus project in 4 cities: Ho Chi Minh City, Vung Tau, Long Khanh and Bien Hoa. The project is held for 1 month in a row with an eye-catching and impressive form, leaving a strong impression on Venezia Beach in the minds of many customers.

Roadshow activation to celebrate the 65th anniversary of BIDV

To mark the important 65th anniversary event and change the logo, BIDV organized an activation roadshow connecting from North to South. The event took place continuously for 20 days, leaving special impressions with customers in many provinces.

Luxury roadshow for Westgate Binh Chanh was held during 28 days. Roadshow moved and appeared on all roads in both Binh Chanh district and the center of Ho Chi Minh City.

Enat 400 and NNO had an impressive car roadshow campaign in Hanoi, Ho Chi Minh City, Da Nang, Quang Ninh, Nha Trang, Nghe An and Can Tho. The campaign selected the central roads, the busiest streets to create the maximum number of visitors.

Bridgestone’s roadshow was launched with the helping of Sixth Sense Media. The cars with the design of Bridgestone traveled through each city’s high traffic roads.

The “big guys” in the real estate industry always know how to make a difference in advertising. A typical example can be seen is the Luxury roadshow campaign of An Gia Real Estate Group which has been launched for 7 consecutive weeks!