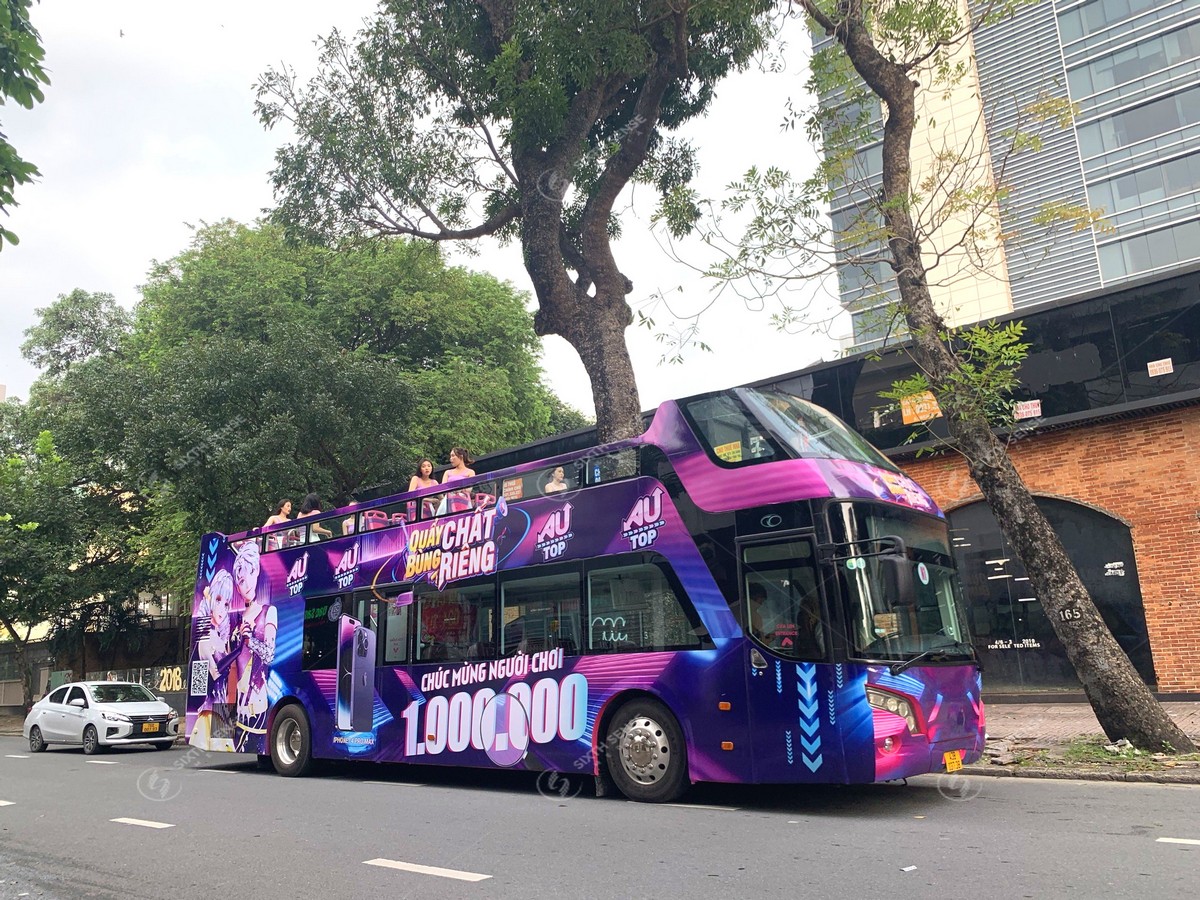 AU TOP is a 3D Street Dance game released in Vietnam by VTC Mobile. Before that, AU TOP had successfully recorded in many other countries such as Singapore, Malaysia, Hong Kong, Taiwan, … with millions of downloads.

AU TOP is considered by experts to be a high-quality dance game series, especially for GenZ with a cute design in color and style.

If you are a fashion lover, you definitely do not miss this game! Because AU TOP has more outstanding features to “Change clothes color” to find your own style and substance.

And as expected, less than 1 month of official release, AU TOP Vietnam has reached 1 million players. 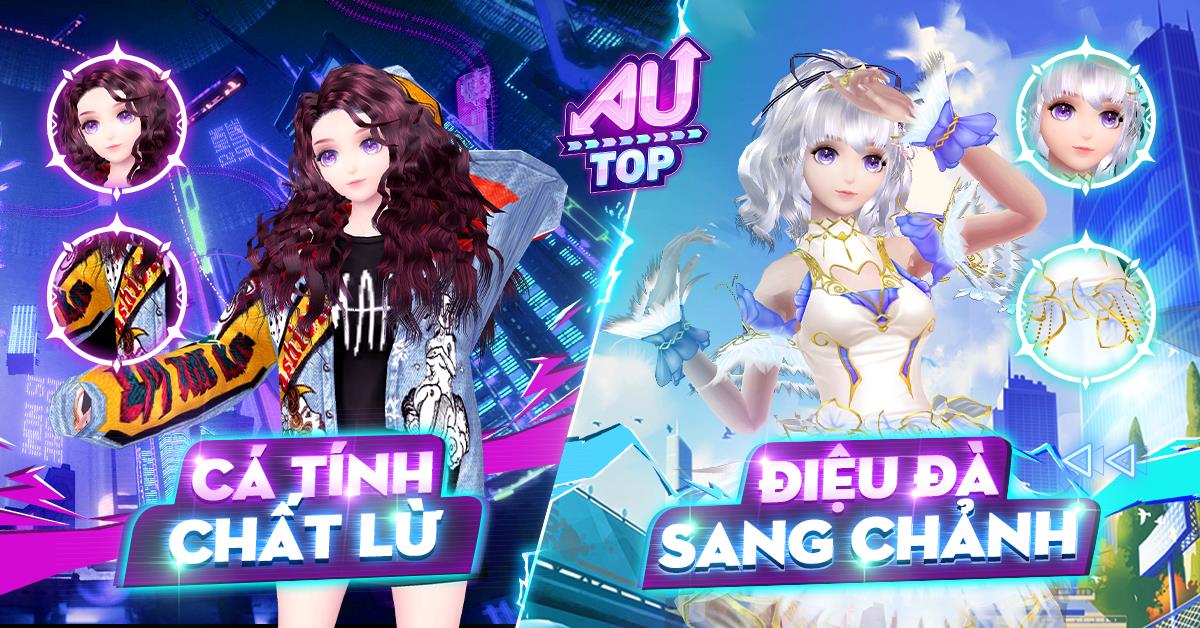 To mark a memorable milestone for development in Vietnam, AU TOP had a grand launch campaign. AU TOP’s double-decker bus roadshow project was held in Ho Chi Minh City with innovation and difference in organization. 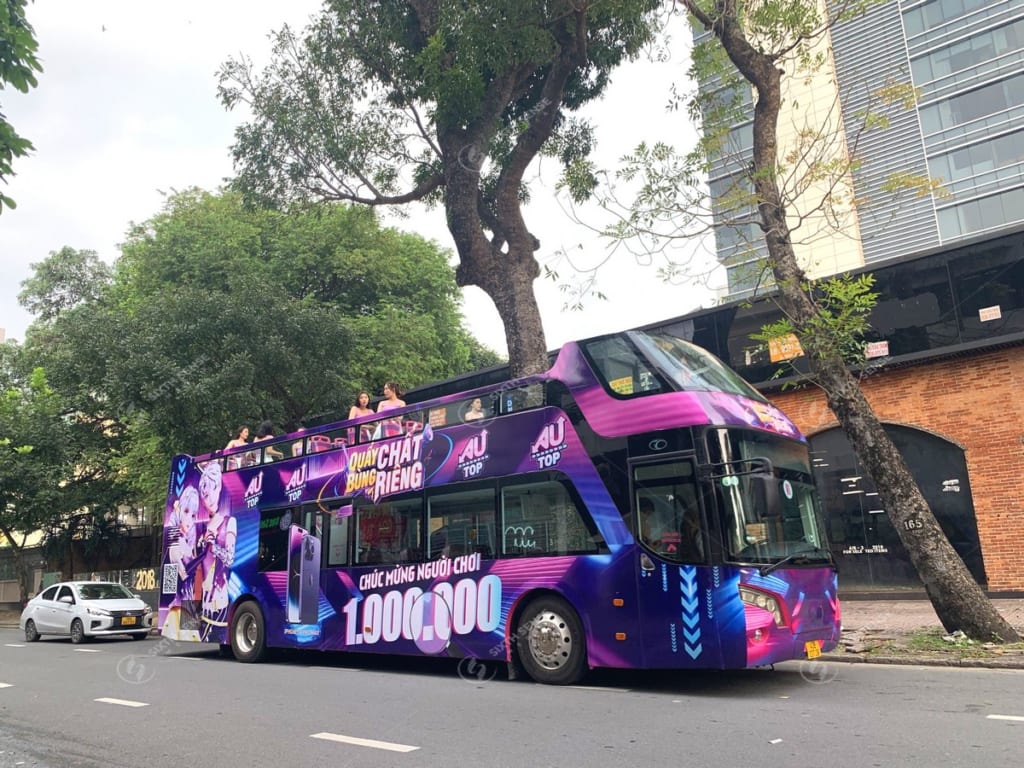 The double-decker bus is decorated with impressive decals on the body and rear of the car. Maquette advertises with purple as the main color, making the car go anywhere, it also receives a lot of attention. 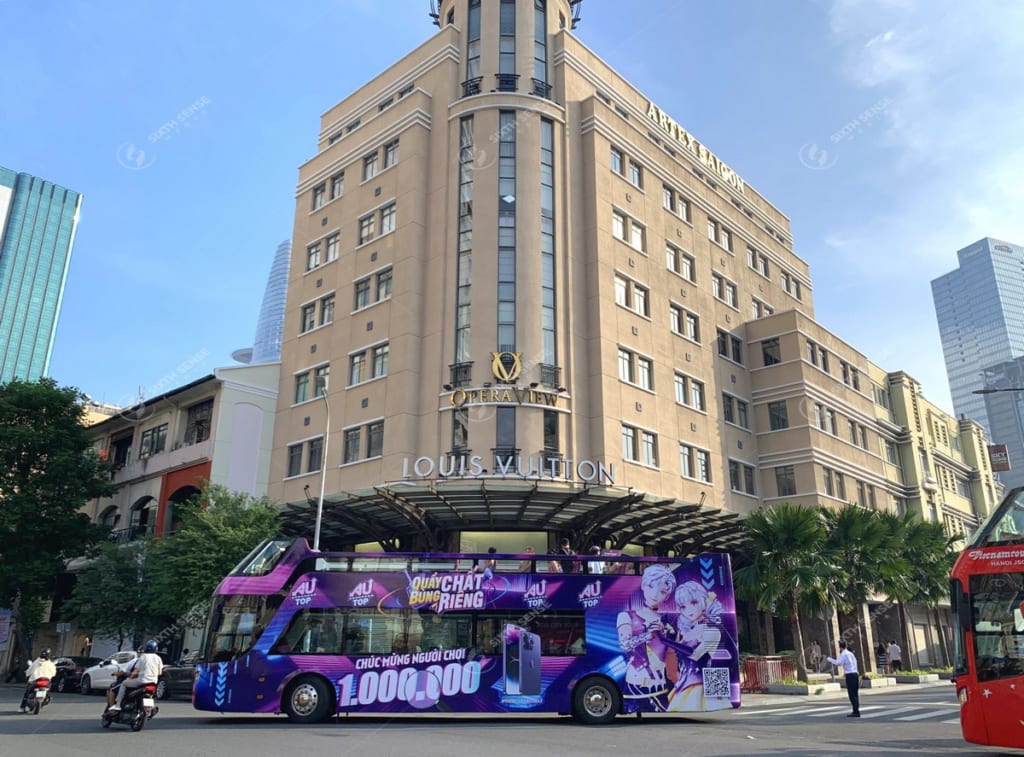 The special feature of this AU TOP double-decker bus roadshow is to exclusively serve the 1 millionth player in Vietnam. On the bus, there will be a team of PG and DJ playing music to welcome this super VIP player. 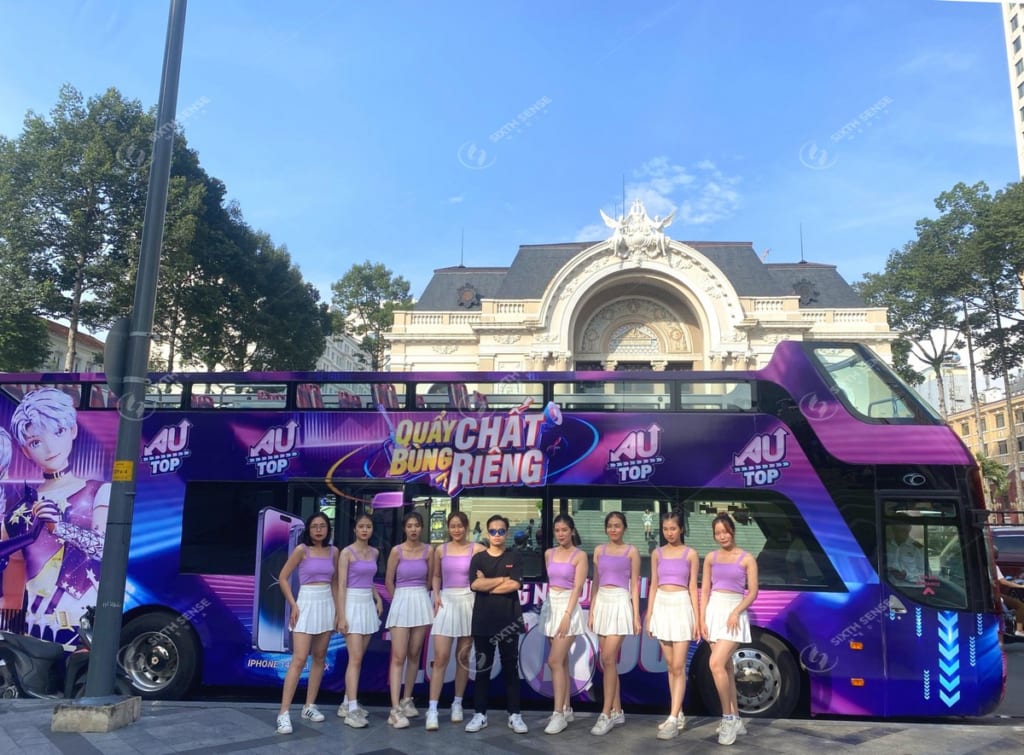 This double-decker bus roadshow of AU TOP only took place within 1 day, but the impact was not small. VTC Mobile chooses Sunday to organize a roadshow, parade in the time frame when the traffic density of the city is the largest. The bus goes along the central roads and major roads in Ho Chi Minh City to reach and attract tens of thousands of viewers. 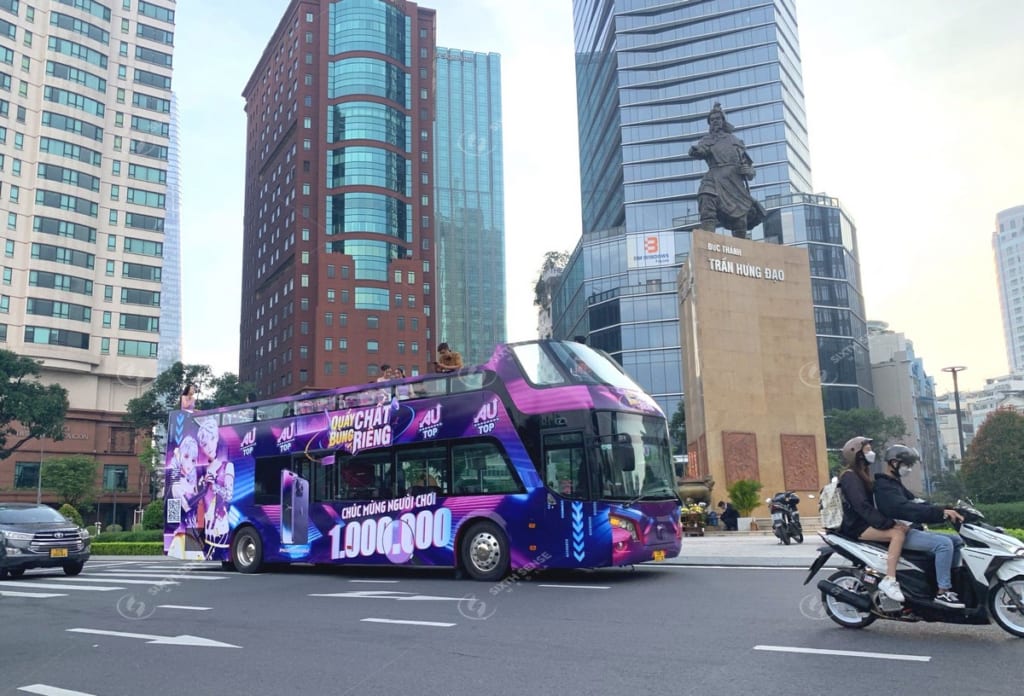 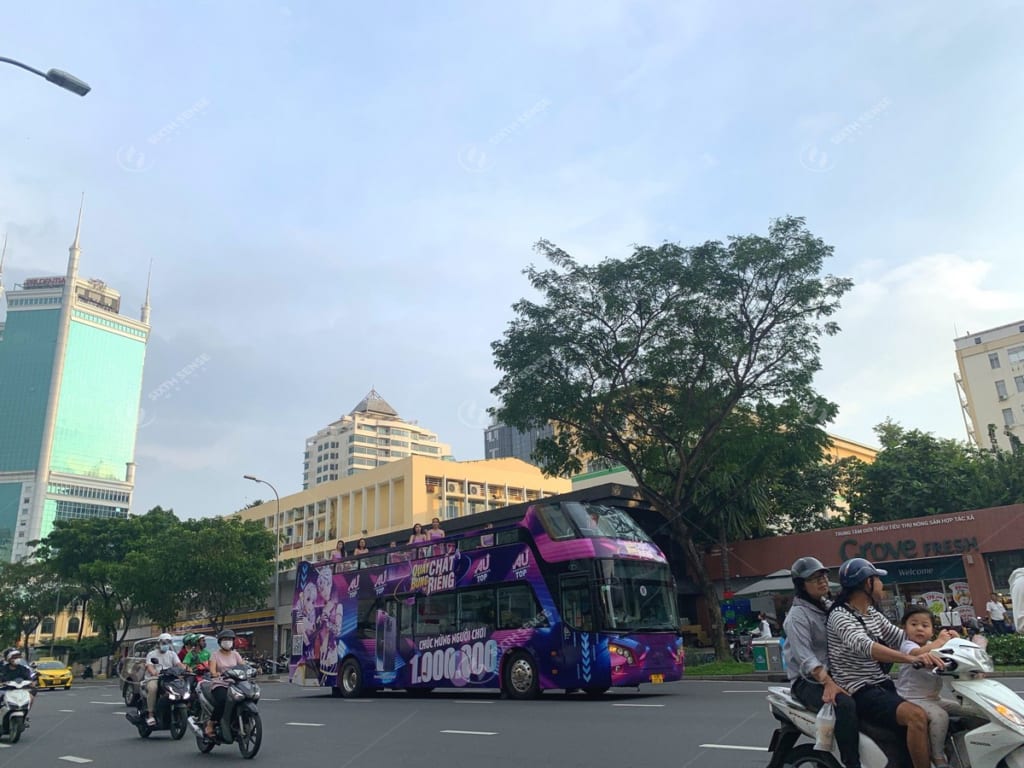 AU TOP’s double-decker bus roadshow project had certain difficulties when organizing it. The amount of work and personnel needed to prepare for the campaign is quite large. But with long-term experience, Sixth Sense Media is proud to have completed the project in accordance with the requirements and expectations from VTC Mobile.

Sixth Sense Media has supported AU TOP with all issues of:

Sixth Sense Media is confident to be a professional double-decker bus roadshow organizer with the most favorable price that will satisfy all customers!

Venezia Beach has had a monumental roadshow double-decker bus project in 4 cities: Ho Chi Minh City, Vung Tau, Long Khanh and Bien Hoa. The project is held for 1 month in a row with an eye-catching and impressive form, leaving a strong impression on Venezia Beach in the minds of many customers.

The roadshow double decker bus project of F.Studio is part of a series of activities to celebrate its 10th anniversary and announce a new upgrade of the store system.

Roadshow activation to celebrate the 65th anniversary of BIDV

To mark the important 65th anniversary event and change the logo, BIDV organized an activation roadshow connecting from North to South. The event took place continuously for 20 days, leaving special impressions with customers in many provinces.

Luxury roadshow for Westgate Binh Chanh was held during 28 days. Roadshow moved and appeared on all roads in both Binh Chanh district and the center of Ho Chi Minh City.

Enat 400 and NNO had an impressive car roadshow campaign in Hanoi, Ho Chi Minh City, Da Nang, Quang Ninh, Nha Trang, Nghe An and Can Tho. The campaign selected the central roads, the busiest streets to create the maximum number of visitors.

Bridgestone’s roadshow was launched with the helping of Sixth Sense Media. The cars with the design of Bridgestone traveled through each city’s high traffic roads.

The “big guys” in the real estate industry always know how to make a difference in advertising. A typical example can be seen is the Luxury roadshow campaign of An Gia Real Estate Group which has been launched for 7 consecutive weeks!