In 2019, Sixth Sense Media is pleased to launch a bus advertising project for INSEE Cement on a large scale covering 9 provinces and cities.

INSEE Vietnam was established in 1993. The company is a member of Siam City Cement Public Company Limited (SCCC) – a leading construction material corporation in Southeast Asia.

INSEE specializes in providing cement, construction mortar, CONWOOD imitation wood cement and waste management products. With high quality and sustainability, INSEE products are found in many iconic buildings and infrastructure projects. Besides, there are also a series of residential and commercial development projects from the North to the South of Vietnam.

During its long operation, INSEE upholds the brand statement “Build For Life”. Each project is created with the participation of INSEE products, which is a contribution to the sustainable development of the economy, environment, society, building a more livable life.

With the goal of “Build For life”, INSEE wishes to bring its best quality products to projects in all regions of the country. Therefore, the company has invested to deploy a long-term bus advertising project on a large scale in 9 cities and provinces: Ho Chi Minh City, Binh Duong, Dong Nai, Long An, Ben Tre, Dong Thap, Da Lat, Tien Giang, Vinh Long. 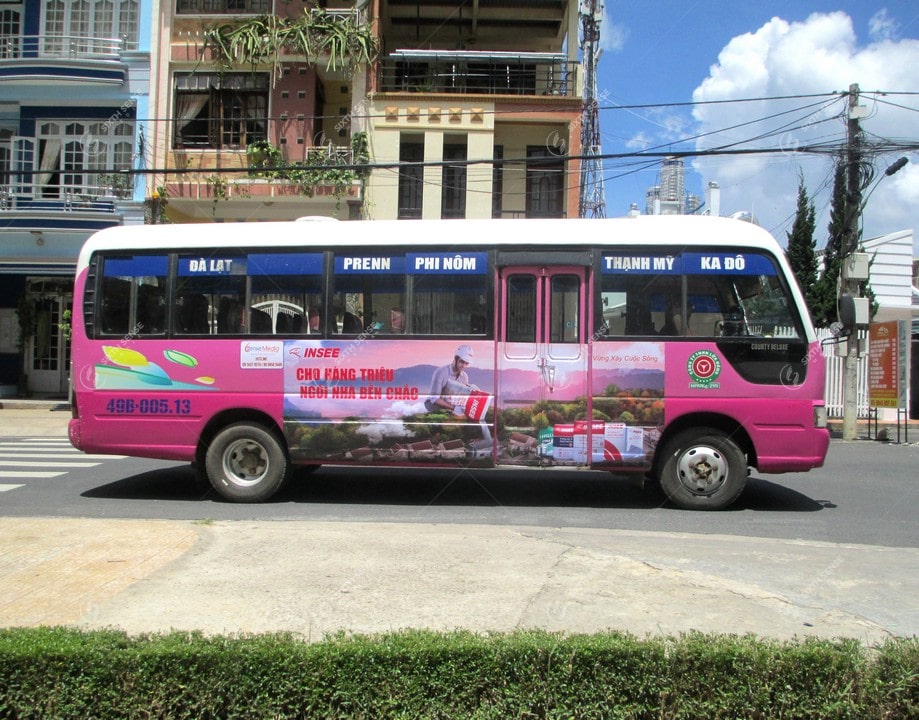 In each province and city, INSEE has tried to choose the most prominent form of advertising with the largest decal size on the outside of the car body. Since then, turning the bus into a mobile billboard with INSEE’s design appearing in many different locations.

INSEE has implemented a long-term bus advertising campaign for 6 months. Every day, the buses operate on average from 12 to 15 hours, generating thousands of impressions. With repeated impact over a long period of time, the INSEE brand will be deeply imprinted in customers’ minds. In particular, bus advertising is not “picky” about customers. Buses run on the road and make anyone passing by to pay attention. Advertising is proactive, highly coercive but does not make passersby feel uncomfortable. They even become highlights that make the street more lively and less boring. Long-term deployment, effective and impressive, but the cost of bus advertising is very economical. With the same budget, you can spread the brand’s advertising design across many locations, but sometimes you can only rent 1-2 advertising billboards.

INSEE’s bus advertising project is a big one. The company chose to deploy advertising at the same time in many different provinces, using a large number of buses and requiring strict management during 6 months. However, Sixth Sense Media can meet all conditions to bring the best campaign and make customers satisfied.

If you need to deploy bus advertising on a large scale like INSEE, do not hesitate to contact us immediately!