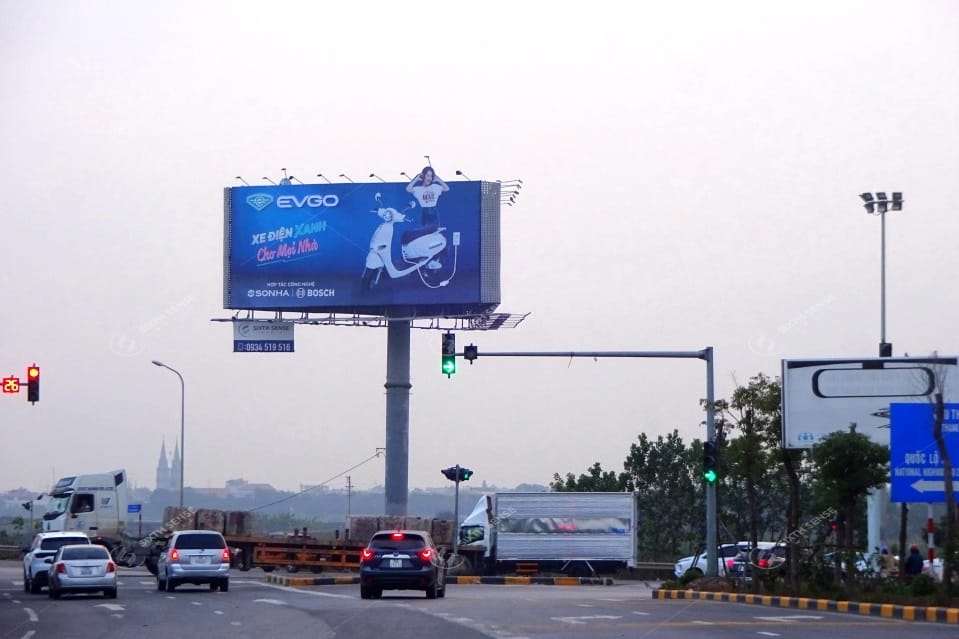 EVgo electric motorbike has had a grand launch with a super impressive and unique floating 3D billboard design. 3-sided billboard is placed right at the large intersection, catching the right visibility of people moving from different directions.

Entering the electric motorcycle market in Vietnam quite late, Son Ha chose a quick approach to success. Instead of researching a completely new product, Son Ha’s cooperation with Bosch – a famous electric vehicle group in Germany has contributed to the launch of the EVgo electric motorcycle product sooner. 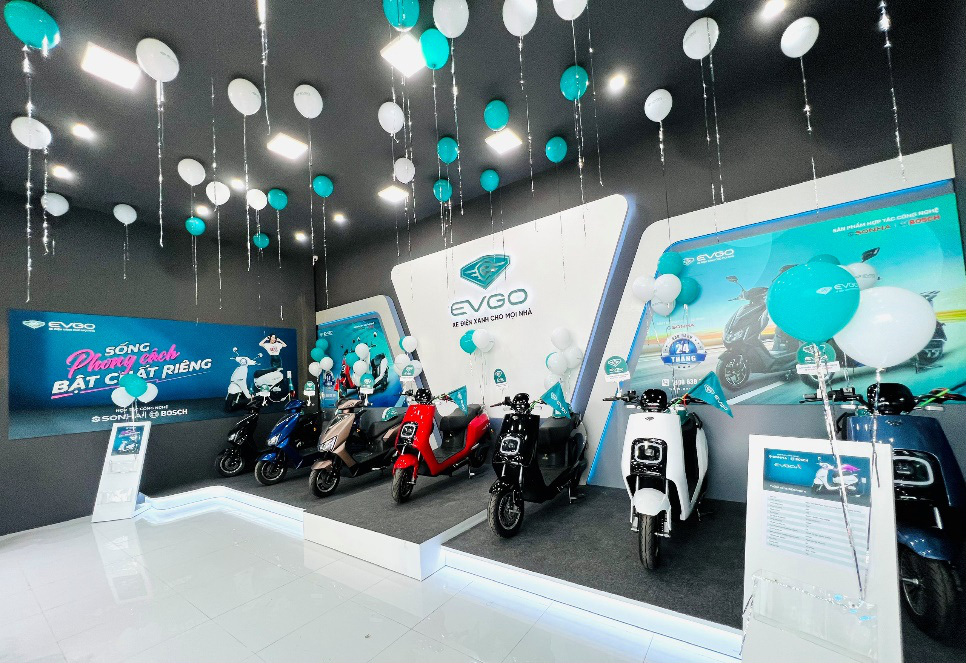 EVgo electric motorbike is divided into 2 lines with 2 different designs and styles.

Both versions of the EVgo electric vehicle have a lifespan of up to 15 years. The vehicle has an environmentally friendly brushless motor, which saves a lot of energy. In addition, EVgo is equipped with front wheel disc brakes, Xenon lights, Led daylight border lights and a remote control smart anti-theft key, ensuring safety and security for the owner. 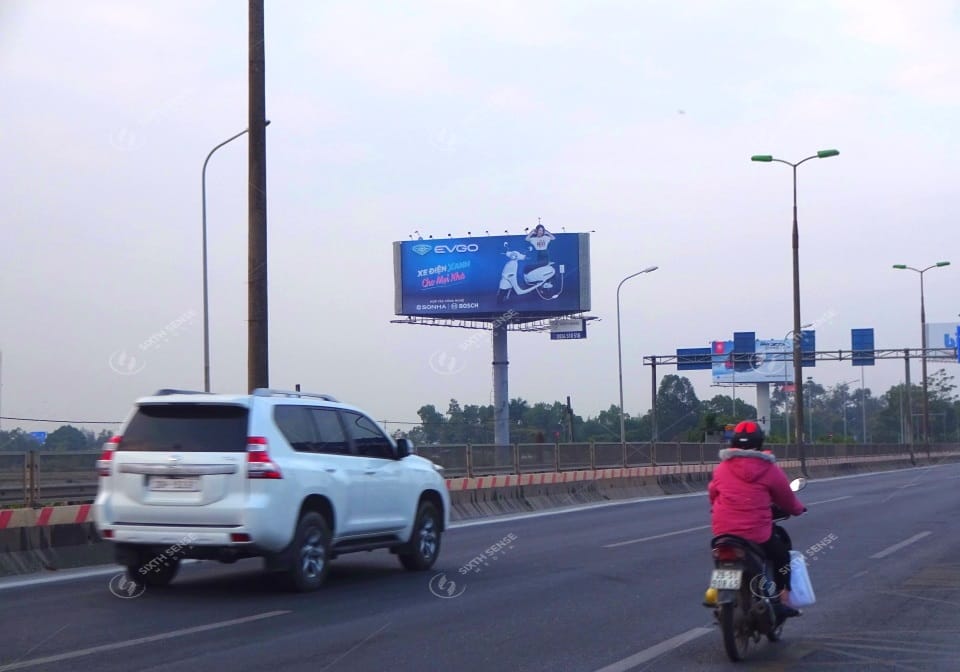 After researching, Son Ha Group chose a billboard location in the area of ​​Thang Long – Noi Bai highway. Billboard is located at the intersection of Noi Bai airport, so it has extremely crowded and busy traffic every day.

The billboard is located right at the big intersection

3-sided billboard have a total advertising display size of up to 420m². This great advantage helped Son Ha create an extremely impressive and eye-catching design for the billboard advertising EVgo electric motorbikes. 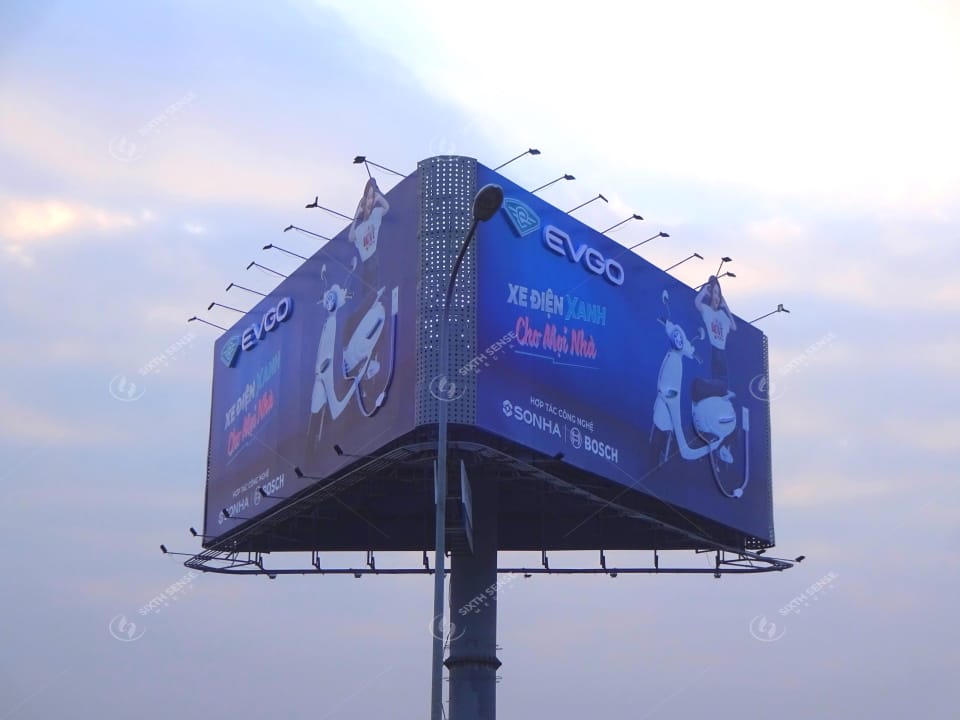 Billboard is designed to be embossed on all 3 sides

Instead of making traditional flat signs, EVgo electric motorbike’s billboard is designed in 3D floating. Billboard during the day is prominent, but in the evening, the lighting system really creates an attractive work. A line of LED lights runs on a billboard simulating a charging motorcycle, clearly demonstrating the features of this vehicle. 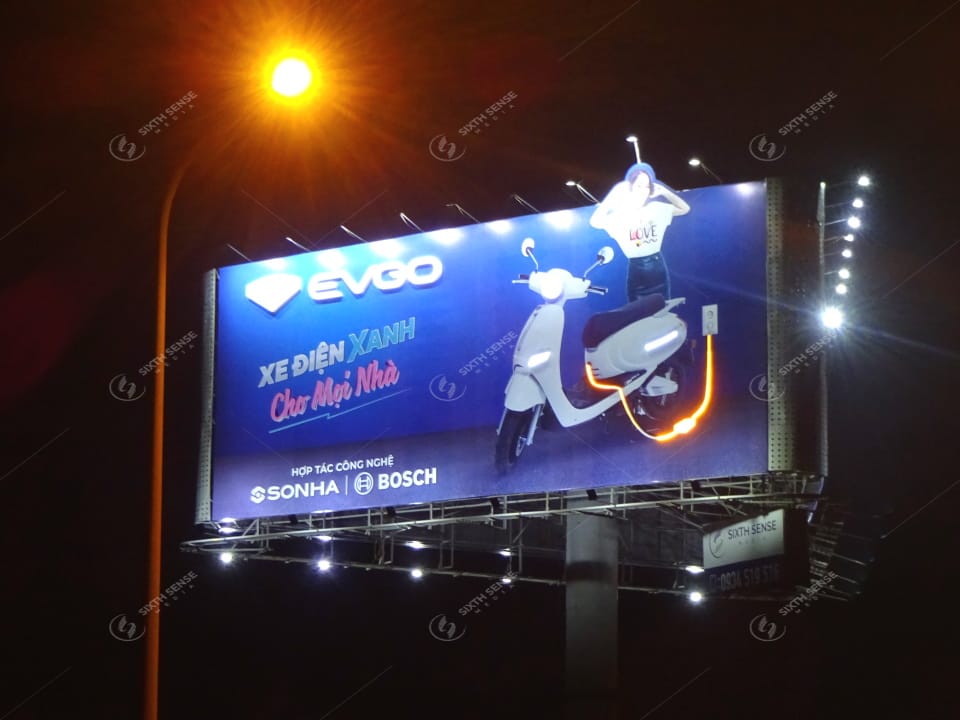 Billboard of EVgo electric motorbike has a very simple and clear layout, short message, easy to understand for viewers to approach in just a few short seconds. Even people moving a few hundred meters away can still see the billboard clearly. 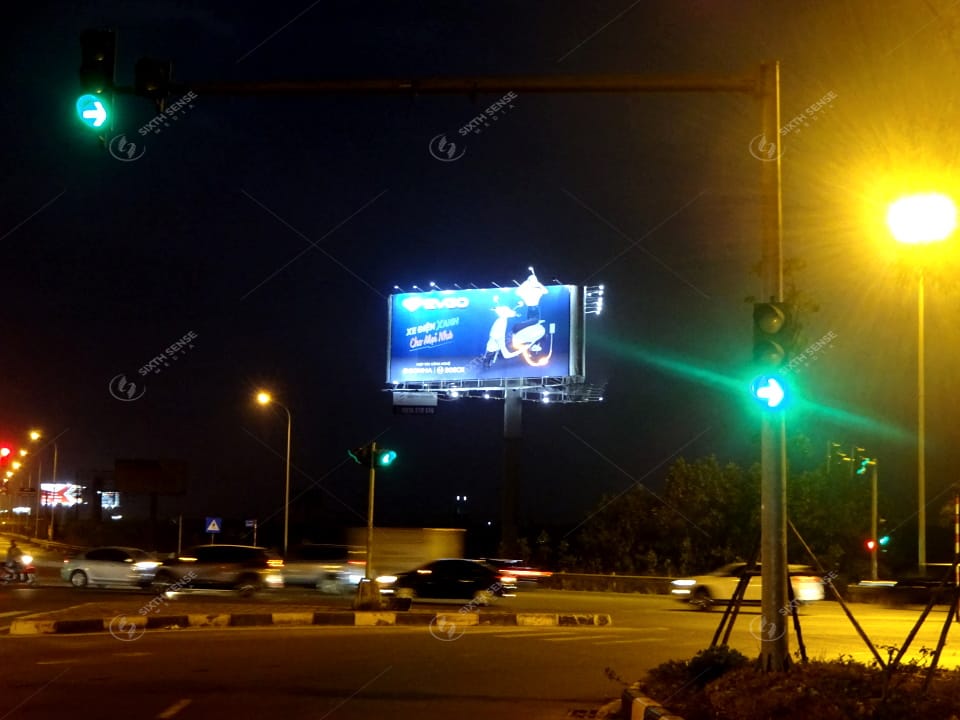 Sixth Sense Media is proud to be the partner chosen by Son Ha Group to deploy the advertising billboard campaign for EVgo electric motorbikes. With our ability and long-term experience, we help brands take care of all problems: field survey, design plan, marine production in 3D format, construction with supporting lighting system and billboard warranty for 2 years.

Unico Global YB has deployed billboard inside its industrial park to recruit personnel and promote their company.

As a new product in the market, in order to better position the brand, the billboard project for Ecool air conditioners has been deployed on two extremely prime highways.

Advertising campaign for wall panels in Hanoi in many districts such as Dong Da, Hai Ba Trung, Thanh Xuan, … About chotot.vn Cho Tot’s goal is to become the leading online shopping market in Vietnam. The purpose of Cho Tot is to allow buyers and sellers to connect and trade securely and easily in a…