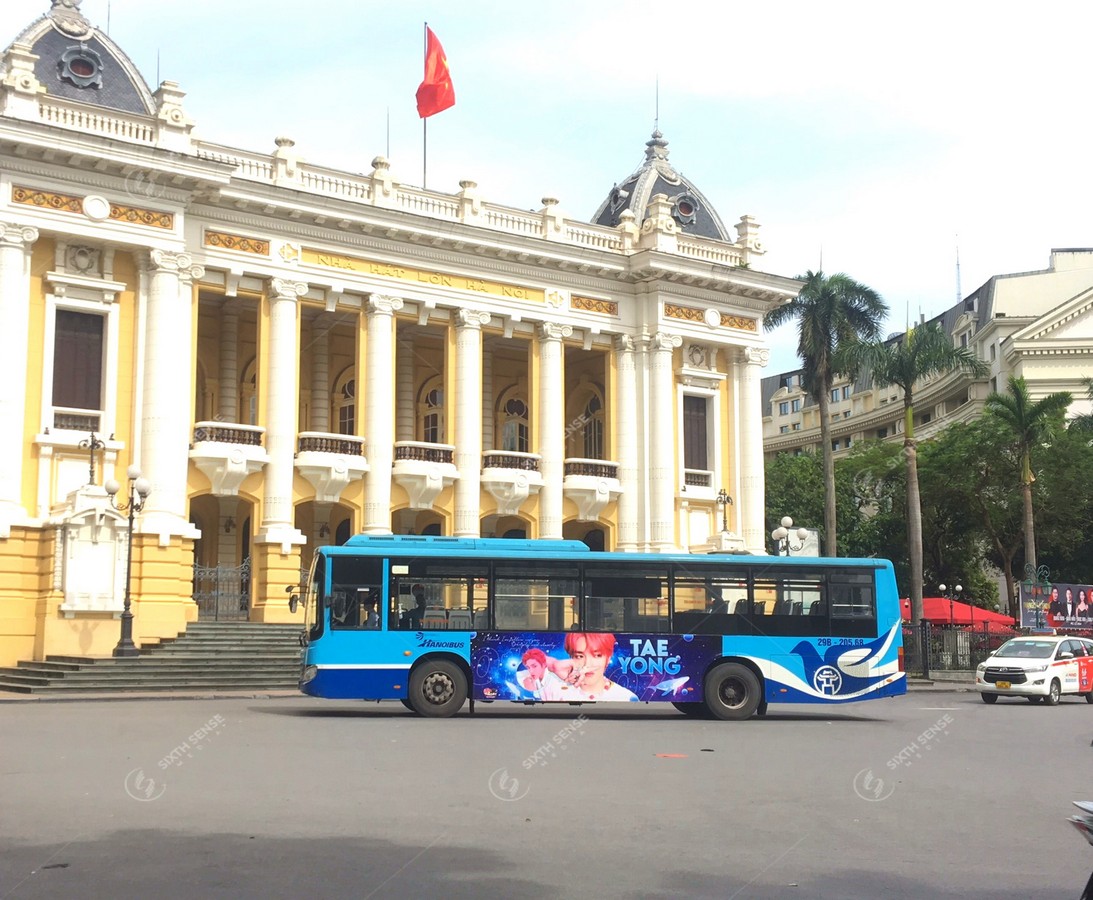 NCT is known as a special group in K-POP with a large number of members. Currently, NCT has a total of 23 members, working under the sub-units:   NCT U, NCT 127, NCT Dream and WayV. In it, Lee Tae-yong plays the role of leader, rapper and main dancer of NCT 127.

The chance for Taeyong to enter the entertainment industry surprised many people. When he was 17 years old, he accepted to audition only because he received free toast from someone claiming to be an entertainment company representative. He even sang the Korean national anthem at that audition because he didn’t have any preparation.

Taeyong is highly appreciated for his talent as well as extremely attractive expressions every time he appears on stage. That is why it is not surprising that the male idol quickly gained sympathy, attracted a lot of attention and became one of the most “fan-absorbing machines” of this boy band. 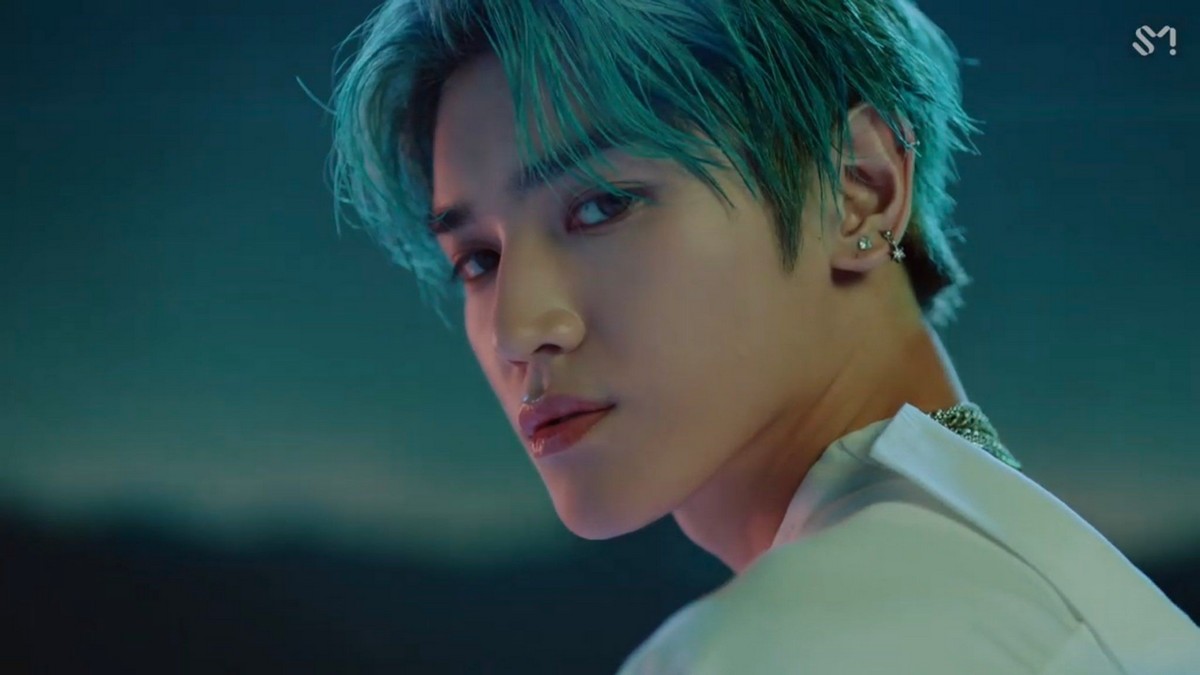 On July 1st, which is Lee Taeyong’s 27th birthday, the ChocoBerry Vietnam fandom has given a gift to the idol. It is a bus advertising campaign to celebrate Taeyong’s birthday on bus route 02 in Hanoi. 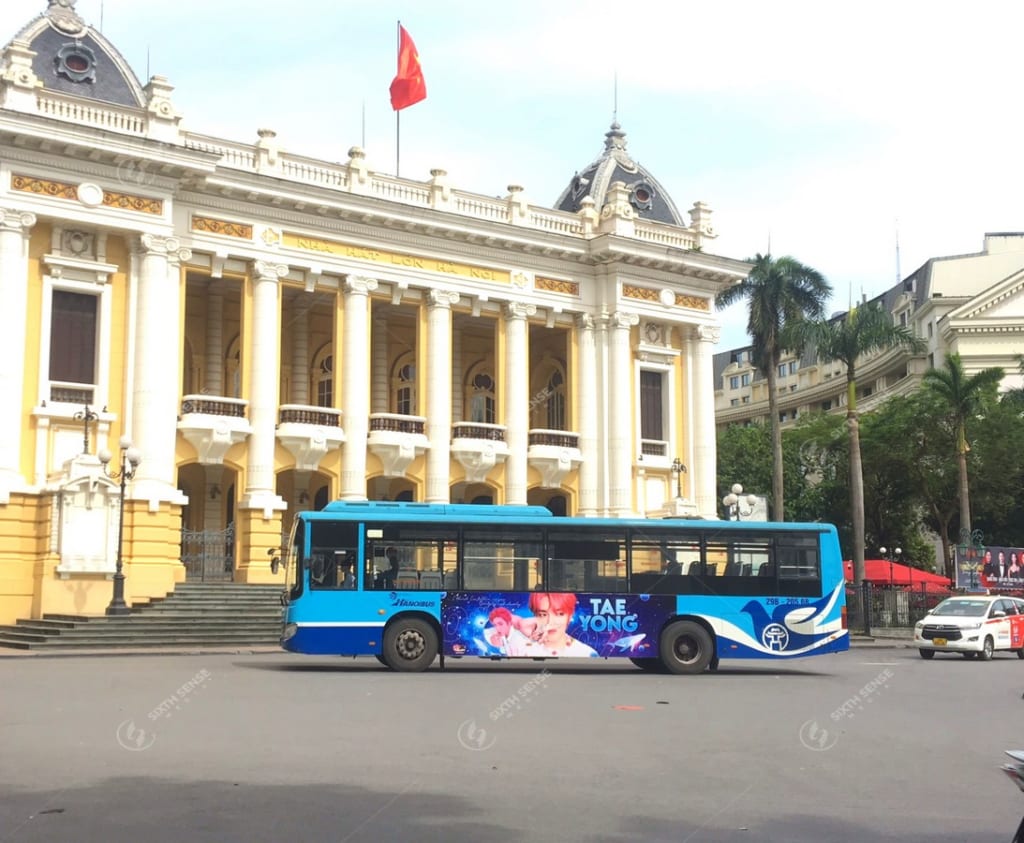 Bus route 02 runs through many central streets in Hanoi

This is the second time ChocoBerryVn has celebrated their idol’s birthday with a bus ad. The method of conducting this time is somewhat similar to the bus advertising campaign to celebrate Jaehyun’s birthday in the previous time.

This time, the bus route selected to advertise is Route 02: Bac Co – Yen Nghia bus station. This is one of the bus routes with the ideal route. Specifically, there is a journey to move through many major central streets in Hanoi. With this route, ChocoBerry fans can easily meet their idols every day on their way to work, school or outing. 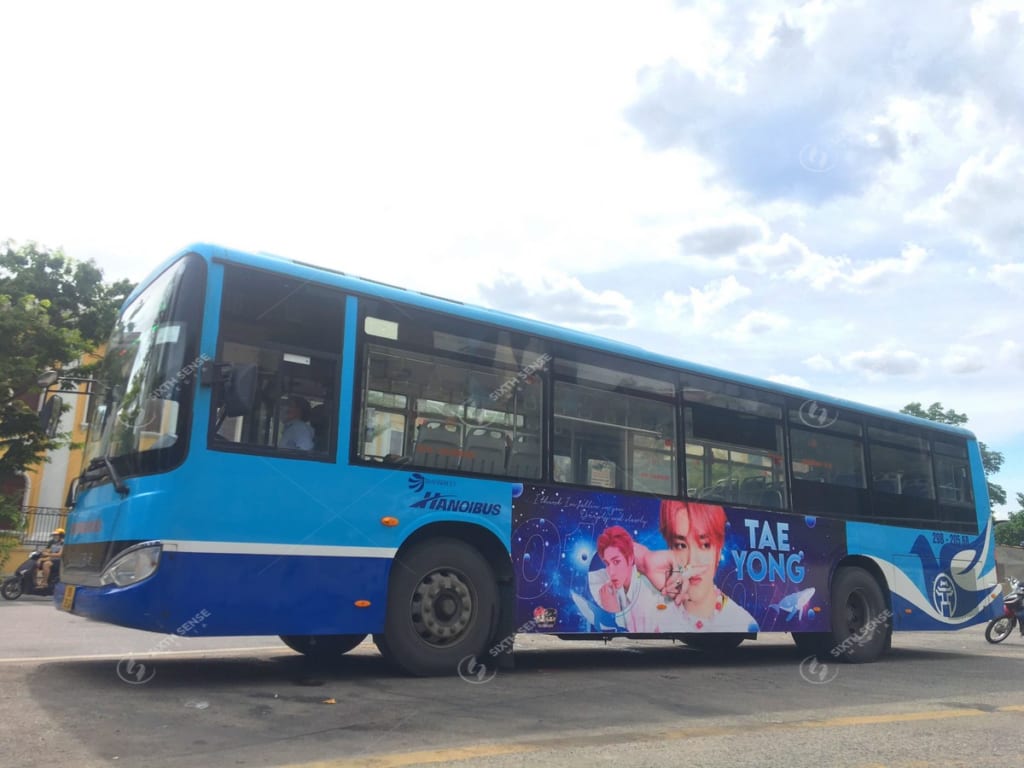 Maquette printed with Taeyong in large size, pasted on both sides of the bus body. The eye-catching advertising position easily attracts great attention every time the bus runs on the street. Fans can take pictures to check in with the bus at the stops, showing their love for their idols. 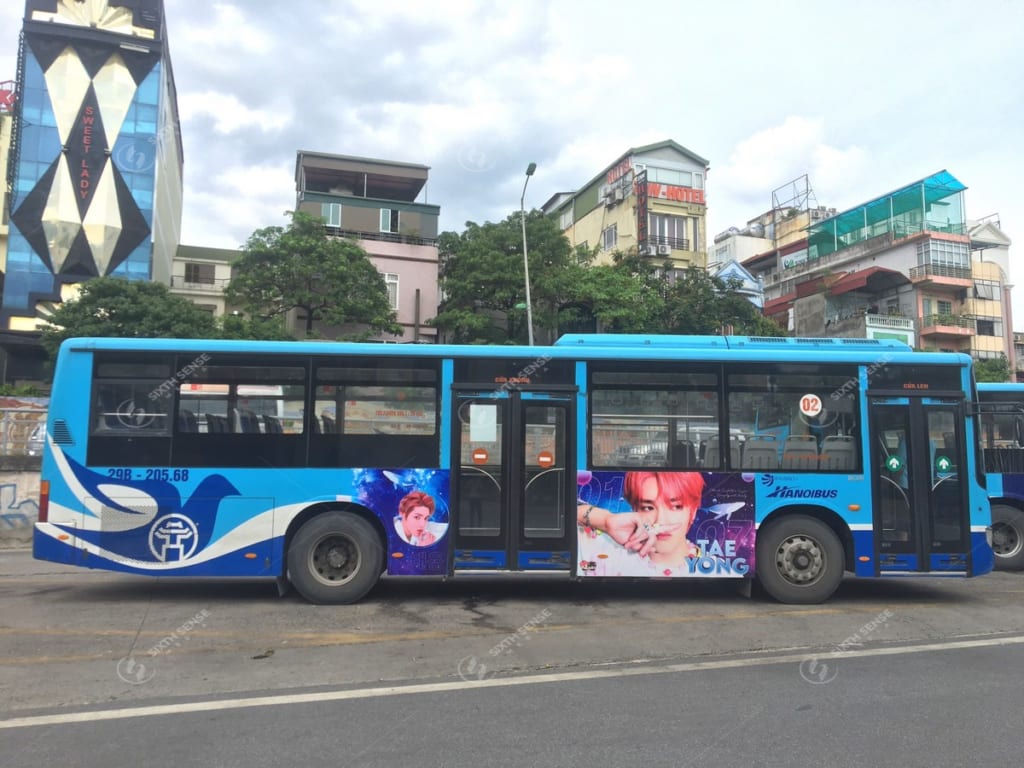 Bus route 02 in Hanoi operates from 5:00 to 22:30 every day. The bus advertising campaign in Hanoi to celebrate Taeyong’s birthday will take place from June 20 to July 20. So hurry up and “hunt” idols on the bus right now! 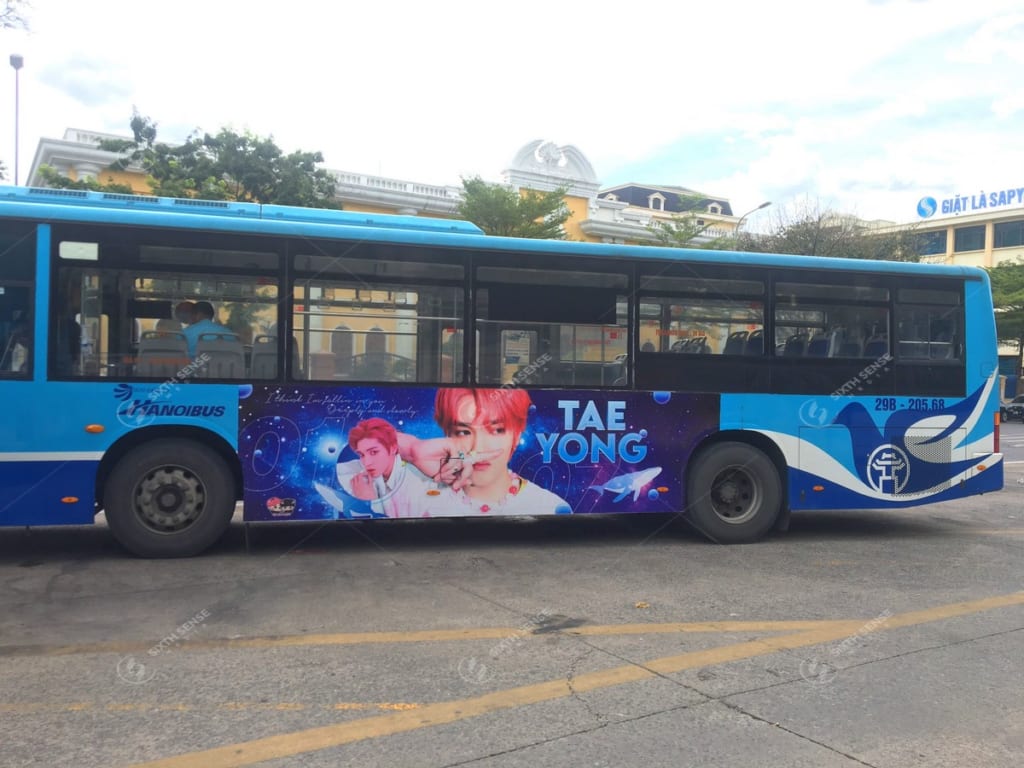 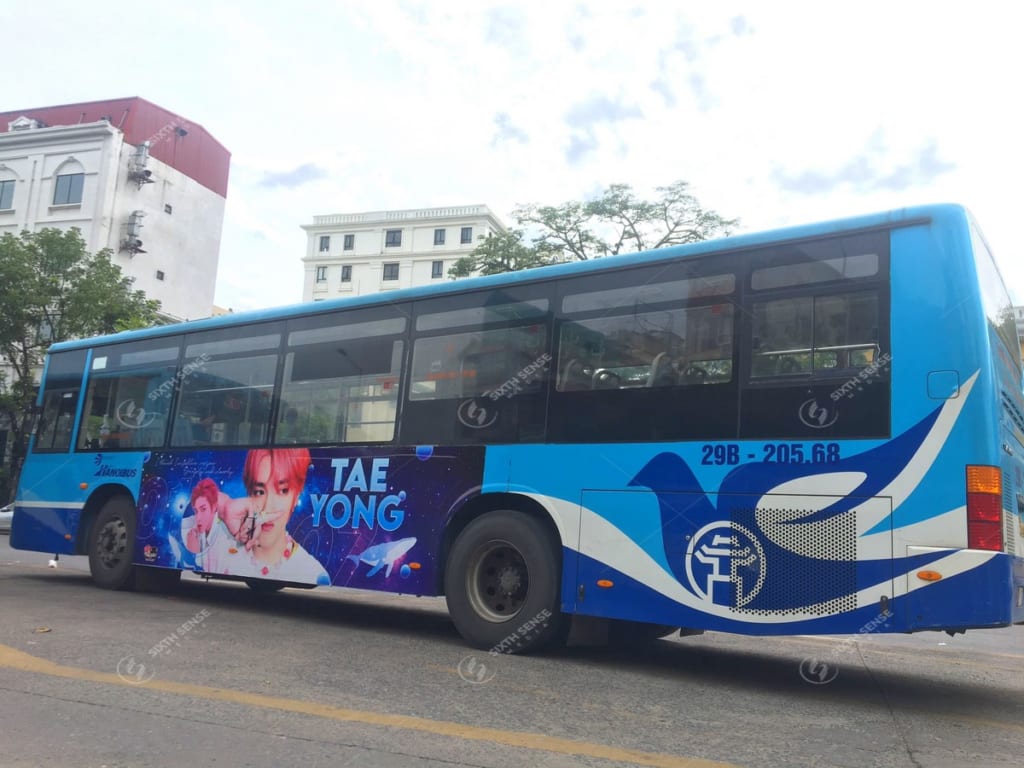 Sixth Sense Media is very happy to continue to accompany ChocoberryVN in another idol birthday project. With the experience from the project launched in previous February, we planned and deployed the promotional bus to celebrate Taeyong’s birthday very quickly.

Even if it’s small advertising campaigns in a short time, when working with Sixth Sense Media, you can rest assured that we will still support you with both professional services and the most affordable prices!